For handwritten taxpayers, preparing their tax return isn’t the problem. It’s the fear of an audit. Audits are fairly uncommon, but the IRS may notice your tax return if certain red flags are present. Here are some of the common audit red flags to help you prepare for the possibility of your return being reviewed.

Making or receiving alimony payments. Alimony payments are taxable income to the recipient and deductible by the payer, but divorced spouses sometimes fail to use the same numbers. For that reason, the IRS matches deductions taken by the payer to income reported by the recipient. Differences could mean one or both of the spouses are selected for an audit.

Having an undisclosed foreign bank account. Taxpayers with balances in foreign accounts that total more than $10,000 during the year must file FinCEN Form 114, commonly referred to as an FBAR. International banks are now required to report U.S. account holdings to the IRS, so failure to file an FBAR could result in severe penalties and possibly an audit.

Claiming big deductions. The IRS tracks statistical data, such as average charitable contributions at every income level and average amounts of other common deductions. Taxpayers who claim above-average deductions might be asked to provide receipts to substantiate those amounts.

Business or hobby. If you have a Schedule C in your tax return and it shows a loss, be prepared for a review. The IRS knows many “businesses” are actually hobbies because they lack a profit motive. Be prepared if this describes one of your business activities.

If you fall into one of these red flag categories, you can prepare for a potential audit by maintaining proper documentation. If the IRS contacts you about an audit, don’t panic. Give us a call — we’re here to help. 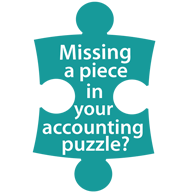